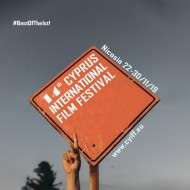 The Cyprus International Film Festival “Golden Aphrodite” holds the EFFE Label “Europe for Festivals, Festivals for Europe”, is Under the Auspices of the Municipality of Nicosia and it is supported by the Deputy Ministry of Tourism and the foreign embassies in Cyprus. The Cyprus International Film Festival (CYIFF) takes place annually and its goal is to be the best European Film Festival for first shown filmmakers.
The festival is dedicated exclusively to the emerging independent filmmakers who are going to present the screening of their film in front of a VIP Jury consisted by international cinema celebrities. With the competition section of first feature films in the category "Golden Aphrodite" and first short films in the category “CYIFF Got Talent", the festival's motto is the following: “The Best of the First!”. The festival includes also the following categories:

The aim of the Cyprus International Film Festival is to inform and inspire the audience through great films. The subjects of Gender equality, diversity as well as refugee status are paramount.