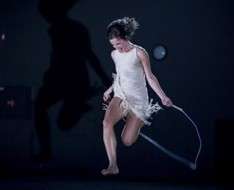 Tereza Hradilková found inspiration for the physically demanding challenge of Swish while working on the dance film Beating. Fascinated by the ease with which the boxers jump over the rope, their rhythm and the interplay of their hands and feet, she started exploring her own boundaries. The jump rope is more than just a game for children; it also symbolises ambition, desire for performance, self-improvement. “Do you skip over yourself, go beyond your borders, or are you trapped in a repeating circle from which you cannot escape?” asks the performer, whose work won the “Dance Piece of the Year” award at Czech Dance Platform 2017.

“I was fascinated by how boxers jump rope. I enjoyed the lightness of their movements, their changing rhythm, the movement of their arms and legs, which was a kind of dance all of its own. I was enchanted by the different kinds of jumps and skips; and what really got me was the sound of the jump rope that accompanied their movements,” Hradilková explains.

Tereza Hradilková started dancing as a child in the Valášek folkdance group and then decided to study at the Duncan Centre Conservatory and, later on, at the Theaterschool Amsterdam. She embarked for two months to New York in search of experiences and then started dancing for various choreographers in the Czech Republic and abroad. Her first work, the duet Variable with Einat Ganz, was immediately accepted for Aerowaves Spring Forward. To engage in further experimentation, she co-founded the Truhlárna space, where she also created her most successful solo so far, Swish, awarded by the international jury at the Czech Dance Platform and was invited to many prestigious international festivals, such as Rencontres Chorégraphiques Internationales de Seine-Saint-Denis, Julidans NEXT, TANEC PRAHA festival or Tanzmesse 2018.

Filip Míšek is a musician and composer. He is a founding member of the band Khoiba with which he recorded, participated as an author on two albums, two EP and concerted in the Czech Republic and Europe. Nowadays, he creates under the pseudonym Dikolson. His debut album, The Bear is Sleeping Now was released in 2011 by the Minority Records and later, in 2013, in Japan by Friend of Mine Records. He composes music for films (Restart, Day of the Dragon, Pleasure, Lichožrouti), as well as for theatre and dance performances (Termination condition, Anticodes, Boys & Girls, Guide, Swish).

The performance is in Czech and English, with English subtitles.