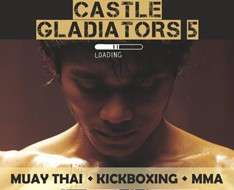 For the fifth year in a row Paphos Thai Boxing & MMA Fight Club presents, Castle Gladiators 5, on 26th of July in Atlántida beach at Geroskipou, Pafos.

This year 6 countries will be participating such as Cyprus, Greece, U.K. , Israel, Russia and Bulgaria. This amazing show will bring among the best Muay Thai, Kickboxing and MMA athletes of all over Cyprus against foreigners, plus WKF European & national titles.

Press conference, on 25th , will be held in Almyra hotel in Kato Pafos at 17:00 and it’s open to the public!