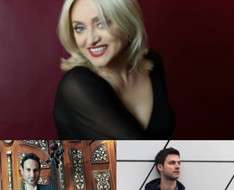 Christina Doxa (vocals) is an actress, singer and acting coach. She is a graduate of the Theatre Academy in Warsaw, Poland where she obtained Masters of Arts degree. Christina continued her education at the American Academy of Dramatic Arts and New York Film Academy. She performed in theatre productions in Poland, Cyprus, USA, UK and Australia. She appeared in various TV series, musicals and music events. Christina's theatrical background lead her to another artistic passion which is vocal jazz performance, that tells a story through the lyrics. Inspired by the great Cypriot jazz singer Sarah Fenwick, Christina travelled to USA to study vocal jazz performance at the New York Jazz Academy and New York Jazz Workshop School of Music. Christina continuously attends the legendary Barry Harris Jazz workshops in the USA and Europe. Among Christina's teachers are the best American jazz musicians and vocalists such as Marion Cowings, Yaala Ballin, Ron Wilkins, Fay Victor and Jay Clayton.
Alexis Kasinos (guitar) is a guitarist and composer based in Cyprus. From the age of 9 he attended piano lessons and a year later he started playing the guitar. After participating in various projects and performing in different concerts and music festivals he was accepted in Codarts Conservatory of Rotterdam where he studied Jazz Guitar Performance and finished his BMus degree with a “Cum Laude” (With Honor). In 2014 Alexis was accepted in Amsterdam Conservatory where he graduated as a Master of Jazz Guitar student with a final recital of 8,5. During his studies in the Netherlands Alexis performed with small and big ensembles in well-known venues such as Lantaren Venster and Melkweg Theatre. He also participated in various jazz workshops and he had lessons from worldwide successful musicians such as Peter Bernstein, Jesse Van Ruller and Gilad Hekselman. In the meantime, he is developing his own album and performs with different bands as a sideman and a leader by playing concerts with original compositions and arrangements.
Κostas Challoumas (bass) was born and raised in Larnaca. He studied pedagogy at the University of Cyprus, where he graduated in 1999. He studied double bass and music theory with Nikos Ioannou and continued his studies at ‘The Collective School of Music’ in New York with Sean Conly and Joe Fitzjerald. For twenty years he is a member of various musical ensembles (traditional, jazz, latin etc.) and also of music and theatre performance groups. Amongst others, he was a member of the musical ensemble of ancient instruments "Terandros", the original Cuban band "Havana Noche" and "Turnaround Jazz Quartet", while the last years he is the artistic director of "Makam Ensemble". He has collaborated in concerts and theatrical performances in Cyprus and abroad with important Greek composers and singers such as: Stavros Xarchakos, Glykeria, Giorgos Dalaras, Pantelis Thalassinos, Vasilis Lekkas, Dimitris Basis, Eleonora Zouganeli, Nena Venetsanou, Sofia Papazoglou and others. In recent years he has been working as a teacher in Primary Education. There, besides teaching music, he organizes and directs major contemporary orchestras with the pupils of the schools, who experiment and create through electronic and traditional instruments.