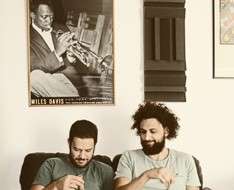 Antreas and Christos grew up and developed a musical language from a young age. Playing together since day one they developed a strong bond within different bands over time. After a while they reunited for a unique duo performance. A conversation that blends their experiences over the last years. Known and unknown songs from the jazz repertoire is expected to be their main form of focus.

Antreas Yerolatsitis (guitar) was born in 1988 in Lefkosia, Cyprus. At the age of 6 he started classical piano lessons in a music school in Nicosia, that was in collaboration with London's Royal School of Music. When he went to high school at the age of 15, he had his first classical guitar studies, for 1 year along with the piano studies. From the age of 16 to 20 he had rock/blues guitar and modern music theory lessons. In that period, he played rock/pop music with deferent bands in Cyprus, in various clubs and festivals in weekly basis. In his 20th year he moved to Rotterdam for 1 year, to prepare himself for the entrance examinations of the various conservatories of the Netherlands. He was playing with students from the Rotterdam's Conservatory, and he had lessons with teachers like Ed Verhoef and Peter Nieuwerf. In 2009 he accepted and started his studies in the Royal Conservatory of The Hague as a Jazz Guitar performance bachelor student. After the bachelor he got accepted in the master’s program of the Royal Conservatory of The Hague from where he graduated in the summer of 2015. Since then he is performing on a regular basis with various projects and groups in musical events, festivals and various stages and clubs, along with music teaching.