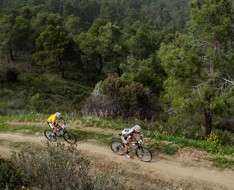 The Cyprus Sunshine Cup is one of the most prestigious mountainbike event in Europe.
An ideal springboard to the season.

On 21st February the 23rd edition of the four-day Afxentia stage race will signal the start the Cyprus Sunshine Cup 2019. This classic race on the sunny Mediterranean island welcomes both Olympic and amateur bikers alike for four days of fun trails. The Sunshine Cup will conclude on 3rdMarch with the XCO race at the ancient ruins of Amathous.

Looking back at the 2018 edition once again confirms that the four days of racing in Lefkara, Lythrodontas and the Macheras Mountains are a very suitable springboard for the season.

The winner of the men’s race was the Swiss BMC rider Lars Forster who later in the summer became European Champion. Second was the American Howard Grotts at his Cyprus premiere and a few weeks later he triumphed, together with Cyprus regular Jaroslav Kulhavy, at Cape Epic in South Africa.
For the women, Olympic Road Race Champion Anna van der Breggen topped the standings and took so much tailwind to the tarmac that she won the World Tour race in Siena a week later. She went on to win her first World Champion’s title at the end of summer.

Annika Langvad also started a successful season in Cyprus. The Danish rider won the Cape Epic again, was World Cup runner-up in cross-country and won the World Marathon title for the fifth time.
No wonder that the Cyprus Sunshine Cup and the island of Cyprus are appealing to world-class athletes for training and competition year after year. Each year the riders sing the praises of the temperature, scenery and trails that make Cyprus an ideal training destination.
And what's good for the professionals cannot be bad for the amateurs!
Four stages for the pros, three for the amateurs
The concept and format of the Hors Categorie stage race has been retained by the organizers. The downhill time trial from Lefkara to Skarinou will open proceedings on Thursday 21st February.

Friday will start and finish in the mountain village of Lefkara and cover 52 kilometres, while the third stage will be a 66 kilometre loop through the Macheras Mountains with the start and finish in Lythrodontas. The finale is the classic cross-country race at Mantra tou Kampiou Picnic Place.
All-Inclusive-Package
For the fourth stage, the amateur bikers can relax in the special VIP zone, watching the professional race whist enjoying coffee and snacks (unless they are tempted to do a few laps on the demanding cross-country circuit themselves!).
An all-inclusive participation package has been set up by the organizers to cater for the Amateur riders and other riders who will not have the support of their team. All the information one can find in the event website
Final in Amathous
In the second week the great scenery of Amathous awaits the bikers. The Category 1 race in Agios Tychon, just outside Limassol, offers a unique course between ancient ruins and overlooking magnificent views of the Mediterranean.