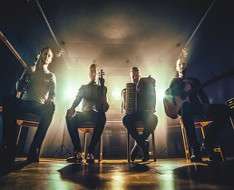 Rialto Theater hosts, in July every summer, groups and musicians of the World at Heroes Square.

Fourth Moon were founded in 2013. Since 2016, the quartet has been successfully performing in international folk festivals all over Europe. Their programme consists of an original repertoire, entirely composed and arranged by the members of the band. The music of the quartet has its roots in the Scottish and Irish rich musical traditions, but it develops by following new and innovative ways. With backgrounds and music influences from classical and jazz to Eastern European traditions, Fourth Moon’s sound is strong and unique and it fuses many different styles. Fast and virtuosic reels and jigs are mixed with slower tunes and more contemplative moments. Riffs, loops and dynamic changes follow each other in a pulsating flow and the melodic instruments often take the place of the accompaniment and vice versa. BBC Radio Scotland described them as "absolutely amazing" and the BBC Radio Ulster as "a group to be entrusted with the jewels of trad themselves”.