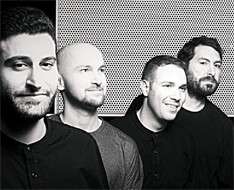 Technopolis 20 welcomes the summer and its outdoor music concert session with the newly founded ‘Fusionia Quartet’, on Sunday, 2nd of June, at 20:30.
The first event of Technopolis 20 in the garden will host four excellent musicians, all members of the Cyprus Symphony Orchestra, on their second appearance as ‘Fusionia Quartet’!

‘Fusionia Quartet’ came together in order to try to synthesize over time, any worthy idea of fusion between the classical string quartet repertory and other styles in mixed programme concerts, using their original compositions and arrangements, creating a unique style that represents the musical spirit of the 21st Century.

The four musicians will present the String Quartet no 2 op. 13 by F. Mendelssohn and the premiere of the Cypriot Suite, arranged by the Fusionia Quartet.

A few words about the programme:
F. Mendelssohn - Quartet no. 2, Op. 13, “Ist es wahr?” In the introduction to the first movement is a quote from Mendelssohn's song 'Ist es wahr?', the first line of which is ‘Is it true you are waiting for me in the arbor by the vine-clad wall?’ Some writers have suggested the piece derives from Mendelssohn's emotions concerning a youthful love affair. A much more powerful and significant presence in the quartet, however, is that of Beethoven. After the Adagio introduction, the Allegro Vivace bursts into a passionate sonata-form structure in which the material is treated in counterpoint. A dissonant transition leads to a secondary theme, group, made up of 3 themes. The development section is frantic, and after the recapitulation, there is more development in the coda. The pensive slow movement is marked Adagio non lento. The 'Ist es wahr' figure from the first movement appears in the first section, as does a quote from the Cavatina of Beethoven's String Quartet, Op. 130. Its central, fugal segment is clearly a reference to the fugue in the middle of the slow movement of Beethoven's Quartet in F major, Op. 95. Not only are the subjects very similar, but the fugue in both cases begins in the viola and is answered by the second violin. As in the Beethoven, the fugal material alternates with the beginning of the movement, but in the Mendelssohn the two sections are less disparate and come together at the end. Of the four movements in the Op. 13 quartet, the third, an Intermezzo, is the least indebted to Beethoven. It has a more lyrical sound than many of Mendelssohn's scherzos, and the contrasting central section Allegro di Molto is filled with youthful liveliness. Mendelssohn's "recitative" introduction to the last movement is a blatant imitation of the same procedure in Beethoven's String Quartet in A major, Op. 132, where it gives way to the ensuing Presto. The development section contains reminiscences of the recitative introduction and the fugue of the second movement, which returns yet again in the coda. Mendelssohn brings the listener full circle by closing with a reprise of the Adagio introduction to the first movement, stretching the melody of 'Ist es wahr'. Here, the first violin makes a continuous line from reminiscences of the introduction to the main theme of the finale, the second movement fugue and the main motive of the first movement, unifying the entire piece and making clear the relationships between the themes.

Cypriot suite: In the idea of the quartet’s purpose - to find a fusion between all music styles and express it in a modern view - their first original work is, as it should be, a Cypriot Suite in their own arrangement, which is based on most known Cypriot folk themes and motives.

A few words about the artists
Marios Ioannou (violin) began violin lessons with Sorin Alexandru Horlea under the supervision of Professor Matheos Kariolou at age of 11 in 2006. In 2009 he studied at the Pancyprian Gymnasium and Music school of Nicosia which lasted for 3 years. He studied Music at the Trinity Laban Conservatoire of Music and Dance under the supervision of the Professor Andrew Sherwood and Boris Brovtsyn and he had his MA at Royal Academy of Music under the Prof. Mateja Marinkovic, Jack Liebeck and Alexander Sitkovevsky. He is qualified violin teacher (LTCL) from Trinity Laban since May 2016. Marios is a member of the Cyprus Symphony Orchestra since 2012, a private violin teacher since 2013 and principal of 2nd violin in Cyprus Chamber Orchestra since 2016. He has played in different orchestras and he has participated in a number of masterclasses.

Savvas Lagou (violin) was born in Larnaca in 1991. He began violin lessons at the age of 7 at the annex of the Conservatoire of East Attica in Larnaca where he graduated in 2009. Immediately after, Savvas became the student of Sorin Alexandru Horlea who was his major influence as a musician and violinist. Prior to his studies, Savvas served in the army for two years as a member of the military band (S.M.E.F). In 2011 he studied for one year at City University of London under Magdalena Filipczak. While he was a student there he gained a place to transfer as a second year student at Trinity Laban Conservatoire of Music and Dance. Throughout his studies, Savvas received the "Ludwig Lebell Scholar" and “Marios Tokas” scholarships for a period of three years from the State Scholarship Foundation of Cyprus in 2009. (I.K.Y). At Trinity Laban he studied with Andrew Sherwood. He also had master classes with Philippe Honore, Rivka Golani, John Crawford, Pieter Schoeman, Zsolt-Tihamer Visontay and Remus Azoitei. In April 2014 Savvas performed as a soloist with Somerset Youth Symphony Orchestra followed by two performances with the Cyprus Symphony Orchestra in May 2014. After receiving his LTCL in Instrumental/Vocal Teaching, Savvas had been a dedicated teacher for a year starting September 2015, where he returned to Cyprus to prepare for his MA auditions with his mentor Sorin Alexandru Horlea. From 2016-2018 Savvas was an MA student in the prestigious Royal Academy of Music in London where he studied with Mateja Marinkovic and Jack Liebeck. He also had chamber music coaching with the Doric String Quartet and Levon Chilingirian. Savvas is a co-leader in the first violins of the newly formed Cyprus Chamber Orchestra. He led the orchestra in its first concert performing Bach's concerto for violin and oboe and on various other occasions. On the 30th of April 2017 he participated in the concert “UnitedByMusic Youth” which was a side by side concert with Berlin Philharmonic players in Paphos, Cyprus. Since August 2018 Savvas is a member of The Cyprus Symphony Orchestra in the 2nd violins. Savvas as a member of the Fusionia Duo, has also performed in the Hellenic Centre of London, Synodiko Ieras Mitropolis Kykkou and Wigmore Hall (Trinity Laban students’ concert). Finally, Savvas has been working as a professional violinist and singer since 2006 participating in festivals of classical and traditional Greek and Cypriot music in Cyprus, Greece, Belgium, Italy, Romania, Slovenia and London.

Sorin Alexandru Horlea (viola): He was born in Bucharest in 1975 and started the violin at the age of eight. He graduated from George Enescu Music High-School where he studied under maestro Octav Savitchi and Ciprian Porumbescu Music University where his Professor was maestro Daniel Podlovschi. He took part in summer-courses with Viktor Pikaizen and Eugen Sarbu. In 1997 he won the third prize at the George Enescu Childhood Memories contest in Bucharest. During his university studies he played in the Radio Chamber Orchestra, Philarmonia Chamber Orchestra and in Bucharest Opera, but mainly in George Enescu Philharmonic. In 2000 he moved to Lebanon to fulfil his position in Lebanese National Symphony Orchestra, where he became the assistant concert master. He moved to Cyprus in 2005 and since then is a member of the Cyprus Symphony Orchestra. He is also working as an associate teacher of the Cyprus Youth Orchestra. Alongside his output as an orchestral musician, he is an active performer as a soloist and in various chamber groups throughout Europe and Middle East, playing not only classical but also jazz and folk music. He was a member of Cyprus String Quartet, and the folk band Danube Quartet. He regularly performs contemporary music as he is a resident musician at the Avaton Festival in Limassol, a member of the Chronos Ensemble, and of the Ensemble Cyclamen. Sorin is playing on a modern violin by Stephan Sultanian. www.youtube.com/sorinestera

Jakub Otčenášek (cello): he was born into a family of no musical tradition. Out of curiosity at the age of 14 he started to play piano and one year later, at 15, he took first classes of playing the cello. At the age of 16 he became a member of "Europera Jugendorchester" where he was allowed to work with the conductor Miloš Krejčí. Only one year later he started his studies at the Prague Conservatory in the class of Renata Strašrybková. At that time he won several prizes at national competitions and took part at international competitions as well. In years 2010-2012 he was principal cellist of Prague Conservatory Orchestra (2011 this orchestra played the opening concert of international music festival ‘’Prague Spring’ with Jiří Bělohlávek as a conductor). 2012 he graduated with Schumann Cello Concerto accompanied by the abovementioned orchestra. Since the academic year 2012/13 he is studying at the ‘Konservatorium Wien Privatuniversität’ with Prof. Lilia Schulz-Bayrova. Within the last accomplishments he is allowed to count a special price of ‘Enami-Stiftung’ at the chamber music competition ‘Fidelio-Wettbewerb 2014’ in Wien. Since November 2016 he is the principal cellist of Cyprus Symphony Orchestra. Jakub Otčenášek took part at masterclasses with well-known artists such as Michaela Fukačová, Michal Kaňka, Bruno Weinmeister and Natalia Gutman. He has given concerts through Europe (France, Germany, Italy, Switzerland, Poland, Czech Republic, Austria) and has made several recordings for the Czech Radio (works for cello and piano by Czech composer Jarmila Mazourová with her playing the piano part) and Czech National Television (works for cello and piano by Antonín Dvořák).