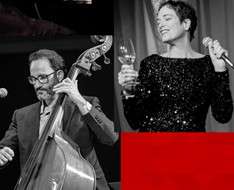 A jazz concert dedicated to the great jazz composer George Gershwin, where Sarah Fenwick sings his music accompanied by Dimitris Miaris on piano, Marios Spyrou on drums and Costas Challoumas on double bass, at Technopolis 20, on Monday, 25th of February 2019, at 20:00.

A few words about the musicians:
Nicknamed ‘Lady Jazz’, the singer Sarah Fenwick has recorded four CDs; Jazz Attack, Love Life, Jazz Way & Jazz Origins. She is recognised as one of the leading improvisational jazz singers on the island as well as being one of the island’s original voices of the genre. Her career stretches back to 1992 when she started to sing professionally in Nicosia. Since then she has worked with most of the top musicians in Cyprus and many from abroad such as Israeli pianist Ari Erev, Scottish guitarist Jim Mullen, Italian guitarist Gigi Cifarelli, and Welsh pianist Gareth Williams. She has performed in Italy, all around Cyprus, in the US, and the Middle East. Her activities in promoting and supporting jazz in Cyprus have earned her the name ‘the voice of jazz.’ In particular, she launched and mediates the Facebook Group ‘Support Jazz and Blues in Cyprus’, and founded the Cyprus Jazz and Blues Association.

Dimitris Miaris was born in Nicosia in 1991. He started playing classical piano from 6 years old. At the age of 16 Dimitris had his first connection with Jazz through the “Jazz Futures” workshops that took place in Nicosia with great musicians such as Sacha Perry, Vahagn Hayrapetyan, Ari Roland and Chris Byars. Since then he took part in almost all the “Jazz Futures” workshops and had various live performances in Cyprus and Greece. He also attended the monthly Bicommunal Workshops with Charis Ioannou. The last two years he participated in Dr. Barry Harris’ workshops in Rome. He is also a member of ‘Neorebetes’, a Greek traditional band, where he plays the accordion. The band has performed in Cyprus, Greece, Kazan (Russian), Sydney and Melbourne (Australia). He received his Bachelor Degree for Jazz Piano at the Ionian University's Jazz Department in 2009 under the instruction of George Kontrafouris.

Costas Challoumas was born and raised in Larnaca. He studied pedagogy at the University of Cyprus, where he graduated in 1999. He studied double bass and music theory with Nikos Ioannou and continued his studies at ‘The Collective School of Music’ in New York with Sean Conly and Joe Fitzjerald. For twenty years he is a member of various musical ensembles (traditional, jazz, latin etc) and also of music and theatre performance groups. Amongst others, he was a member of the musical ensemble of ancient instruments “Terandros”, the original Cuban band “Havana Noche” and “Turnaround Jazz Quartet”, while the last years he is the artistic director of “Makam Ensemble”.

The drummer Marios Spyrou was born in Nicosia in 1990. He was inspired from an early age by his father, who is also a jazz drummer. He has played extensively with the top Cypriot jazz musicians and has a Masters in Jazz from the Koninklijk Conservatorium in Holland.