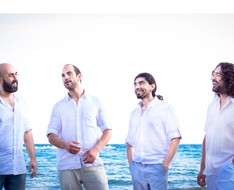 Three Cypriots and one Chilean will travel us into the explosive rhythms of Latin – Jazz, in a beautiful garden in the city centre of Paphos, at Technopolis 20. Enjoy a different approach to Latin, afro - cuban and brazilian rhythms, mostly funk, mixed-up with jazz, on Thursday, 28th of June 2018 at 20:30..

Macumba quartet was formed soon after the arrival of the Chilean bassist Rodrigo Cáceres in Cyprus. There, he meets Rodos Panagiotou, Εlias Ioannou and Giorgos Morfitis, three virtuoso musicians, well-known in the music scene of the island. Macumba will perform regularly within Cyprus, attracting a wide and warm audience.

Facebook : @Macumba / www.facebook.com/MacumbaOfficial
Contact : 0035797857960 , This email address is being protected from spambots. You need JavaScript enabled to view it.

A few words about the musicians
Rodrigo Cáceres: is a self-taught musician from Chile, well-known in the latin, jazz, flamenco and world music scene, internationally. He tours from the early age of 17, and organises seminars all across Europe, Lat. America and Asia, able to appeal a multitude of audiences ranging latin, jazz, flamenco, pop, afro, funk & reggae. During his long-term stay in Spain, he collaborates with the Brazilian percussionist Rubem Dantas (the one who introduced the Peruvian cajón into the flamenco music) and shows up in big festivals: Jazz Almuñecar, Espantapitas, Etnomusic etc. Significantly renowned in the Spanish music scene he plays alongside prestigious musicians such as Diego Guerrero, Chano Dominguez, Tomas de Perrate, Dan Ben Lior, Puchero del Hortelano, Maui and shares stage with international band “Calle 13” at Sonderos Festival. In Chile, he collaborates with the emblematic jazz trombonist Ηector Briseño El Parquimetro and in Sri Lanka he plays with the famous ethnic - jazz band “Naadro”. One year ago, he moves to Cyprus showing up in different festivals with “Macumba” and also plays in Germany with the music group of Andreas Georgiou, invited by the Cypriot Embassy.

Elias Ioannou: was born in Limassol. He has studied at Codarts University in Rotterdam specialising in Jazz Trumpet. He has shown up in concerts all across Europe, Holland & Cyprus highlighting the North Sea Jazz Rotterdam Festival in which he performs up to three times. In the meanwhile, he attends several master classes with world famous musicians such as Barry Harris, Joshua Redman, Snarky Puppy, Aaron Parks and gets introduced to Latin Improvisations alongside the great trumpeter Amik Querra. The last 5 years he has been touring within Holland, recording with different jazz, latin, reggae & pop bands. Finally he ends up to his country of origin, to teach trumpet and work in different musical projects.

Giorgos Morfitis: born in Limassol, started his classical music training from the early age of 6. He gets introduced to Jazz Music at Nakas Music School in Athens, Greece. Soon after he studies at I.S.A Conservatory of Havana in Cuba, focusing on classical music composition, arranging & Jazz / Latin Performance. In 2004 he studies and specializes in Latin Jazz Music at Codarts Conservatory of Rotterdam in Holland, obtaining a B.A & a M.A. In 2012, he moves to Madrid to teach modern music at Gredos College & Katarina Gurska Conservatory. George has participated in well-known European Festivals such as North Sea Jazz Festival Round Town, Madrid Jazz Festival, Paradise Place Jazz Festival, at the national T.V. of Madrid etc. He finally returns to Cyprus participating regularly in different music projects.

Rodos Panagiotou: is a well- known Cypriot drummer, coming from a family of musicians. He shows up on stage at the early age of 10. After studying for several years at the Conservatory of Greece & Rotterdam, he specialises in Latin- Jazz & World Music and sets up the Brazilian Percussion Group Batukinio, performing for the first time at the opening of Cyprus Small Countries Games. During the last 10 years, Rodos has been teaching at the European University of Cyprus & University of Nicosia. He has performed with Blue Wire, New Dimensions and also recorded and toured with well- known composer Andreas Georgiou in Cyprus & Europe. Rodos has collaborated with significantly important musicians such as: Hernan Romero, Giorgos Dalaras, Marios Fragkoulis, Kostas Makedonas, Debora Meyers, Pantelis Thalassinos, Dimitris Mpassis, Glykeria, Stratos Kyrpios, Anagnostakis, Stefanos Korkollis etc.