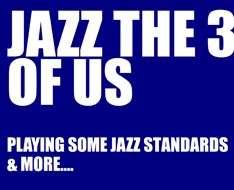 The music trio ‘Jazz the 3 of us’ had their first performance last summer at Technopolis 20 stage, a successful event that left the best impressions. This summer they return for one more concert at Technopolis 20 garden, on Friday, 28th of June 2019, at 20:30.

The band features the deep friendship between the three musicians, Loukas Louka on the keys, Stefanos Pontos on the bass and guitar, and Philipp Psillides on the drums. They have been active in the Cypriot jazz scene during the last 10 years and have had many performances as members of various other jazz ensembles in various music scenes around Cyprus.

Their repertoire includes well-known Jazz standards, mainly in swing and bossa nova, but also lesser known tracks in Jazz Rock, Latin and Funk styles. A main characteristic of this trio, in addition to the well-known experimentation with melody and rhythm in jazz improvisation, is also the experimentation with different combinations of instruments and sounds on keys, such as the combination of the organ, the guitar and the drums without the bass.

A few words about the musicians
Loukas Louka is a Cypriot pianist and music teacher. He started studying classical piano from the age of 8. At the age of 22, he begun studying jazz piano with Cypriot jazz pianist Marios Toumbas and later he had lessons on jazz improvisation with Cypriot jazz guitarist Giannos Savvides. He participated for about 2 years in the Jazz Ensembles of the European University under the instruction of Marios Toumbas and also attended the “Jazz Futures” workshops that took place in Nicosia from 2008 until 2011, under the instruction of great jazz musicians from New York, such as Sacha Perry, Vahagn Hayrapetyan, Ari Roland and Chris Byars. In 2012, he succeeded taking the ALCM diploma in Jazz Piano of London College of Music. Since then, he has performed as a member in several jazz combos during various events in Cyprus. Loukas is currently teaching music in elementary schools and also performing jazz music in several jazz venues all around Cyprus.

Philipp Psillides is a Cypriot professional drummer and instructor. He studied Jazz through the “Jazz Futures,” a program sponsored by the U.S. Embassy, were he had the opportunity to play with and learn Jazz from New York musicians. By the age of 21 he was offered a scholarship at the University of Nicosia, were he majored in Jazz Performance-Drums. After graduating on 2014 Philipp travelled to New York where he took lessons from the well-known drummer Jean-Pierre Bouvet (JP Bouvet). Philipp currently lives in Cyprus and works as instructor in the private school “American International,” in the music academy “Musicopolis” and in the private school “Falcon”. He has also been playing different styles of music, such as jazz and latin, with numerous bands around Cyprus.

Stefanos Pontos is a musician and sound engineer from Cyprus. He studied jazz guitar at the European University of Nicosia and since then has worked with various jazz artists of the island. After his graduation he studied jazz improvisation for another three years with John Savvides. He later moved to the United Kingdom to study Sound engineering and Tour Management. After gaining his diploma he worked for various PA companies and bands on music events and festivals in the UK and abroad. He was one of the in-house sound engineers at BIMM (British Institute of Modern Music) in Brighton, where he also taught Basic Recording Skills. He was the sound engineer on the weekly masterclasses where he worked with a lot of guest artists like Morris Pleasure, Jennifer Batten, Guthrie Govan, Sid Wilson, Adam Wakeman, Remi Kabaka.