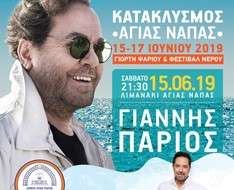 “Kataklysmos” is a religious and popular feast celebrated in Cyprus.
“Kataklysmos”, which means flood, is found in the book of Genesis and in the Greek myth of Deukalion. In both cases it refers to the destruction by flood of almost all-living creatures in order to give birth to a new and moral generation.

The celebrations last for a few days and take place in all sea side towns.

Celebrations include various games, swimming competitions, boat races, performances of folk dances, competitions of popular traditionals songs known as “tsattista”, live music performances by famous Greek and Cypriot singers. The most popular custom of “Kataklysmos” is the throwing of water to one another (symbolises the purification of the body and soul) so be aware!

The four day celebrations for the Agia Napa Flood, Fish & Water Festival 2019 will take place at the picturesque harbour of Agia Napa on14-17 June 2019!

This year's program features a concert on Saturday 15 June by the great Greek artist Yiannis Parios, who along with his orchestra will present songs that marked his long career and a concert by the Greek singer Makis Dimakis, on Sunday 16 June.

Apart from the two concerts, the artistic part of the festival ncludes also Cypriot traditional Dances (Saturday & Sunday 15 & 16/06), funny dialogs from the famous ladies of the Cypriot TV "Popi and Angela", performed by Kostakis Konstantinou and Andreas Argyridis (Saturday 15/06), island dances from the dance group of the Municipality of Ayia Napa (Monday 17/06), "Tsiatista"- traditional poems contest, with the participation of famous folk poets (Monday 17/06)).

Opening of the festival on 15/06 by the Cyprus Police Force Philharmonic, which will play along Makarios Avenue to the venue and will be accompanied by Emilias Salouta (Coach-Choreographer of the Cyprus National Team) team of cheerleaders.

Fly Board Show (14-17 / 06) with Exclusive Cyprus Distributor, Sea Motor Jet Skiing (Sunday 16/06) and the 7th Water Festival (Monday 17/06 at 10.00am) will be held at Agia Napa Harbour.
In the framework of the fish festival, the fish taverns of the surrounding area, will prepare fish dishes for the visitors.

On Monday, June 17, ceremony in the church of St. George.