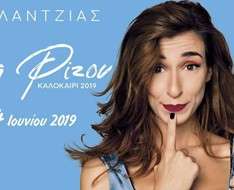 The Greek singer Mariza Rizou is ready to begin her summer tour.

With songs from her discography so far, but also from her 3rd album that will soon be released by Feelgood Records (already in radios the hit "Let's Laugh Often", that they have written together with Kostis Maraveyias) and of course the new hit (also from the next album) - "Among the stars").
With songs that she loves and songs in adaptation with Markos Chaidemenos and other collaborators.

Seats in Skali Aglantzias are numbered.