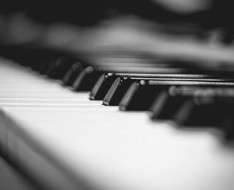 The newly founded Piano Duo, comprising of Marianna Georgiou and Maria Avraam, presents their second concert, of contemporary works for piano solo and piano for four hands. The programme includes works by Saariaho, Kurtag, Kagel, Hakim, Ligeti, Bartok and Poulenc. The concert will take place at Technopolis 20, on the 5th of April at 20:00.

A few words about the musicians
Marianna Georgiou was born in 1993 in Pafos, Cyprus. She took her first piano lessons at the age of five and was classically trained for twelve years under the supervision of the Bulgarian tutor, Ivelina Ruseva. She attained her first Soloist Piano Diploma (ATCL) at the age of seventeen. She also took classical guitar lessons and passed her Grade 8 classical singing exams (ABRSM) with distinction. In 2011, she began her academic career at the University of Nottingham under the supervision of Brenda May and achieved a scholarship and a First-Class Honours for the Bachelor’s degree based on Piano Performance. In 2015, she attained her Master’s degree in Piano Performance and Performance Practices from the University of Nottingham. During her studies, she was part of various orchestral ensembles (The University of Nottingham Symphony Orchestra, the chamber music ensemble, accompanist of vocal groups and the 20th century ensemble). She has taken part in several masterclasses and concerts around UK and Cyprus (Masterclass - Janina Fiaklowska/Clare Hammond, Derby Arts festival -awarded the second prize-, Pre-Concert artist at the Royal Albert Hall of Nottingham for Czech Philarmonic). In her most recent years, Marianna has performed as a soloist and as part of ensembles in concerts and festivals around Cyprus and from September 2016, has taught piano at the Music Schools of Pafos.

Maria Avraam is a pianist and flutist specialized in contemporary classical and experimental music. She studied music at “Marios Tokas” Music Lyceum and European University Cyprus. During and after her studies she participated and performed in piano and flute master-classes in Greece, UK, Germany, Belgium, Cyprus and Netherlands. She has developed a wide repertoire ranging from baroque to contemporary music. Her baroque, classical and romantic music repertoire includes performances with the Cyprus Youth Symphony Orchestra, Cyprus Symphony Orchestra, Athens State Orchestra, National Orchestra of Prague and “Apple Hill” String Quartet in USA, as well as solo and ensemble performances. Her interest in contemporary music gave her the opportunity to perform as a flutist and pianist in various all-contemporary music events including the Artos Contemporary Music Festival, the “7th International Contemporary Music Festival” of Pharos Arts Foundation, the Flevares project, the Avaton Contemporary Music Festival, the “Tampere Biennale Festival” in Finland, the “Piano Street Festival” in the behalf of Pafos 2017 Organization and the CYSO Ensemble in collaboration with the Centre of Cypriot composers, giving Cyprus and world premieres.