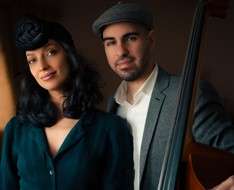 Mood Indigo are back from New York, presenting a new repertoire inspired by the energy and music of New York City. After performing at various clubs in Manhattan with many great musicians, Mood Indigo are excited to share their experiences with the audience in Cyprus, including Paphos. Enjoy one of the most original, vintage jazz bands on the island, for one night only at the garden of Technopolis 20, on Wednesday, 19th of June 2019, at 20:30.

Their repertoire will take you on a journey in times of old, a long gone era of classic swing, performed in unique arrangements. Beautiful songs composed by the likes of Cole Porter, Hoagy Carmichael, Duke Ellington, and songs sung by Billie Holiday, Anita O'day, Sarah Vaughan and others.

A few words about the musicians:
Irene Day Athanasiou is a jazz singer, composer and band leader. She has performed next to Jazz master Freddy Redd, and with musicians such as; Chris Byars, Pasquale Grasso, Ari Roland, Vahag Hayapertian, Phil Stewart, Charis Ioannou, Marios Toumbas, Stefano Doglioni, and Ioannis Vafeas. After living in Toronto for 21 years, Irene Day moved to Cyprus and created Mood Indigo. In 2018 Mood Indigo opened the Dusseldorf jazz rally festival in Germany as the band of honor. Irene was interviewed on WDR news and Inge Hufschlag - A journalist, described Irene as “Coming from the island of Gods, she is other worldly, and touches hearts like Audrey Hepburn.”
In 2017 she released her own personal album entitled “Journey out of Slumber.” with arrangements by Chris Byars. Internationally, Irene Day has performed in USA, Canada, Germany, Armenia and other countries, at various Jazz Festivals & clubs. In 2019 she lived in New York City and performed at clubs in the city. Over the years she has attended the Chris Byars and Ari Roland seminars, the Barry Harris jazz workshops, and the Marion Cowings vocal workshop at Smalls Jazz club. Irene holds a BA in classical voice performance and has studied under Annie Ross, Marion Cowings, and Ian Garrete.

Jazz pianist Marios Toumbas has a Bachelor of Music, Cum Laude, in Music Synthesis (Berklee College of Music, Boston Massachusetts) and a Master of Music with Honors in Jazz Studies (New England Conservatory of music, Boston Massachusetts). He was a student of internationally renowned jazz educator Charlie Banacos and famous jazz pianist Danilo Perez. He has performed all over the world with famous jazz musicians such as electric bassist Anthony Jackson, saxophonist Tony Lakatos and guitarists Jeff Richmond and Brett Garsed. He has also performed at international Jazz Festivals such as the Montreal Jazz Festival in Canada and the Dusseldorf Jazz Rally in Germany. Concert venues include the Royal Festival Hall in London, the Sun City Music Hall in Johannesburg and Megaron Mousikis in Athens, Greece. He has been an instructor of jazz music at European University Cyprus since 2009. He is also a teacher of the international Association Jazz Education Abroad which teaches Jazz all over the world.

Ioannis Vafeas is a professional drummer and educator. He studied Jazz music at the Berklee College of Music in Boston, MA and did his master’s degree in Jazz Studies at the Boston Conservatory. The years that followed found Ioannis busy in the music industry performing, recording and teaching music. He performs regularly in major festivals, concert halls and prestigious jazz clubs all over the world. Vafeas attended festivals and Venues in Germany, Poland, England, Lebanon, Greece, Kuwait, Italy, the U.S, Serbia and shared the stage with great artists and Symphony Orchestras. He has numerous collaborations in cd’s, recordings and theatre productions. Since 2002 Vafeas is teaching Music in public schools. He’s been teaching Jazz Music at private universities in Cyprus since 2009. His credits also include drum seminars on soiling and brush playing in various universities and music schools. In April 2017 he released his first album entitled “Bridge of Locks” with the IOANNOU/VAFEAS quartet. He is the Artistic Director of the non-profit organization A. VAFEA JAZZ Projects. He is endorsing Zildjian Cymbals since 2009. www.ioannisvafeas.com