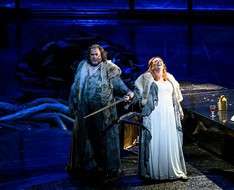 Royal Opera House Presents Die Walküre (The Valkyrie).
Die Walküre is an opera by Richard Wagner. It is the second of four operas.

During a storm, Sieglinde gives shelter to a wounded stranger. They find themselves drawn to each other. He is Siegmund, the twin from whom Sieglinde was separated in childhood. Unknown to them, their father is Wotan, the most powerful of the gods. Through Siegmund, Wotan hopes to retrieve a gold ring of ultimate power that he cannot take himself.

Brother and sister fall in love and flee, taking with them Nothung, a sword destined for a hero. As goddess of marriage, Wotan’s wife Fricka angrily demands Wotan must not protect his incestuous children to serve his ends. Wotan bitterly concedes. However, Wotan’s daughter Brünnhilde, a Valkyrie, takes it on herself to save Siegmund. Wotan stops her, and Siegmund is killed in battle, his sword shattered. Brünnhilde does rescue Sieglinde, who she knows is pregnant with Siegmund’s son, the hero Wotan requires. As punishment for defying him, Wotan incarcerates Brünnhilde in a deep sleep on a mountaintop, protected by magic fire.