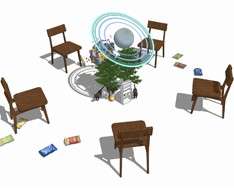 Dutch historian Johan Huizinga considers playing to be one of the oldest instincts of the animal kingdom, and Poiesis (poetry) a play-function, taking place in the playground of the mind, in a world of its own which the mind has created for it.

The Word Game acts thus as a parallelism for the act of creation, a performance presented in the form of a group memory game: players start by stating a place, and something that’s in it, and then go around clockwise adding more objects every time, while also reciting everything the rest of the players said in order. Eventually a narrative is established subconsciously in the mind of each player, which in turn informs the words they will add later on — the same way a poet would compose the lines of their work.

The game ends when none of the players can remember the next word; in this way, the game is also a communal effort of remembering.

Credits
Artist/Coordinator – Adonis Archontides
Participants will be announced at a later date.