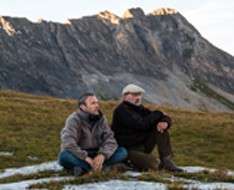 Friday, 15 March 2019, 21h
Venue:
Cine Studio, University of Nicosia,
Lefkosia, Cyprus
In cooperation with The Friends of Cinema Society.  The Ambassador of Switzerland will host a cocktail after the screening.

Michel is a stressed 40-year-old engineer, who dashes from meeting to meeting, consumed by a life that he has forgotten to savour. When his father Robert, refusing to die in hospital, escapes from the balcony and runs off into the mountains, Michel is forced to run after him. This escape and pursuit trigger a tale of discovery and wonder between father and son, which unravels way up in the solitude of a lunar landscape of limestone, water and sky. Michel, suddenly released from the rat race, rediscovers in a dramatic slow-down, the joy of seeing, listening, feeling, dreaming… of quite simply being…of still being alive. He also learns to love – in extremis.