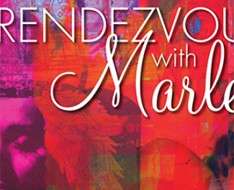 This show is based on a phone call and exchange between Marlene and Ute in 1988 in Paris, 30 years ago. After receiving the French Moliére Award for her performance in Cabaret in Paris, Ute had sent a postcard to Marlene, essentially apologizing for all the media attention comparing her to Marlene Dietrich. Ute was just at the beginning of her career in theatre and music, whereas Marlene looked back on a long, fulfilled life of movies, music, incredible collaborations, love stories and stardom.

Lemper's career is incredible. She has made her mark on the stage, in films, in concert and as a unique recording artist on more than 30 albums over an esteemed 30-year career. She has been universally praised for her interpretations of Berlin cabaret songs, the works of Kurt Weill and Berthold Brecht and the Chansons of Marlene Dietrich, Edith Piaf, Jacques Brel, Léo Ferré, Jacques Prévert, Nino Rota, Astor Piazzolla, her own compositions, as well as her portrays in musicals and plays on Broadway, in Paris, Berlin and in London's West End.